Insulin pens are used by diabetics to self-administer insulin shots. The user turns the cap section of the “pen” to select an insulin dosage. The pen manufacturer needs to know that the torque required to turn the cap does not exceed the ability of an ordinary user.

Dosage-identifying numbers are printed around the circumference of the cap, so selection is by rotation of the cap till the required number is aligned with the raised pointer on the body section of the pen. This rotation requires reasonable effort on the part of the user and distinct clicks provide resistance and response. The notches allow the user to select a dosage if they are experiencing vision problems or are administering in poorly lit environments.

Rotating the cap through the notches requires torque. The pen manufacturer specifies an acceptable range of torque and will conduct periodic torque testing to determine quality and uniformity of product. Insufficient torque would cause the selector to slip around too easily, complicating selection; excess torque would prevent less dexterous or weaker people selecting their insulin dosage with ease. 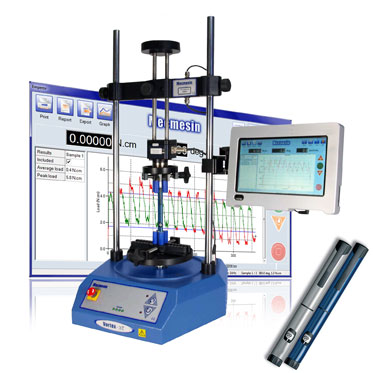 Testing insulin pen rotation torque requires a sophisticated torque tester. Mecmesin’s Vortex-xt (pictured) is such a device. The Vortex-xt holds the pen, gripping it between pegs at the pen’s base and cap. The Vortex-xt’s base rotates while the cap is held static under the torque transducer. This action simulates the user’s rotation of the cap and the resultant torque produces a stream of data that is reported in graph form on the touch screen display connected to the frame of the tester. The graph will identify the pen’s torque performance through one full rotation, revealing uniformity or discrepancy of torque between notches. Graphing occurs in real time, and data from multiple tests can be stored for later analysis.