The Netherlands’ top agricultural and horticultural school, the University of Applied Sciences HAS Den Bosch, in conjunction with Wageningen University, another leading Dutch institution, acquired a Mecmesin Static Torque Screwdriver and Advanced Torque Gauge to help in their research into improving the yield and quality of Teff, a gluten-free cereal.

Teff – Latin name: eragrostis tef – originates in Ethiopia but is currently grown in Europe, the United States, and elsewhere. Teff contains no gluten but is rich in protein, calcium, fibre, and iron, so is potentially important as a health food product and as a wheat alternative for sufferers of coeliac disease.

But teff has struggled to bring growers commercial benefits. The quantities of Ethiopian-grown teff sold on world markets are low, and the cereal failed to grow well in the early stages of its introduction to Europe. Researchers at Wageningen University discovered that a major cause of inhibited yield was the lodging (permanent displacement) of plants. Several field trials were conducted to identify the causes of this lodging.

The University of Manchester supplied the Centre for Crop Systems Analysis in the Netherlands with a Mecmesin torque testing screwdriver to perform tests in the field. For over 30 years, Mecmesin, a UK-based maker of torque and force testing devices, has been providing innovative and affordable measuring solutions for a broad range of applications.

In these tests, entire plants were measured and the three largest shoots carefully removed. The centres of gravity of the entire plant and each separate shoot were obtained by balancing the plant/shoot on a thin, smooth metal tube and measuring the distance between balance point and base end. The gravitational moment of plants, shoots, and panicles under 0, 3, 45, and 60 degrees was obtained using a custom-designed lodging meter, made from a highly sensitive Mecmesin digital torque screwdriver that reads up to 1.5Nm of torque in steps of 0.0001Nm.

The Dutch researchers adopted the Mecmesin device on the advice of their colleagues at Manchester University and praise it warmly for its simplicity and usability.

“The Mecmesin digital torque screwdriver was simple and straightforward to operate and it was very helpful that the user guide PDF was on the net.” 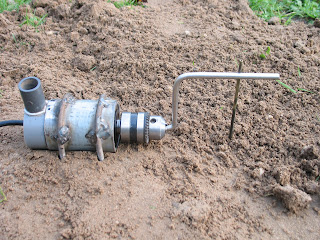