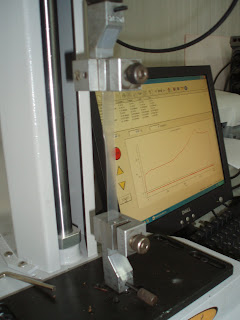 Eurofilm Mantzaris, which produces PE films primarily for packaging and agricultural applications, wanted its product to provide higher tensile strength at yield and break, and an elongation limit that meets the DIN 53455 standard. They also required a device that could automatically generate statistical calculations and report immediate feedback on the performance of individual specimens and batch trends.

After defining Eurofilm Mantzaris’s needs, Mecmesin supplied a MultiTest 0.5-i – a highly capable and popular test device driven by Mecmesin’s own powerful Emperor™ software. The device’s stand features extended travel, to accommodate the heights required in tension testing of PE film and similar highly elastic materials. The MultiTest 0.5-i tests elongation limit, tensile strength, and other material characteristics of polymer products against the specification of industry standards, which in the case of Eurofilm Mantzaris include the DIN 53455. In the test, a PE film sample is secured between two parallel grips that are steadily separated under the precise control of the test stand, stretching the film until rupturing occurs. The stand’s onboard controller records and plots the force applied against the deformation experience of the sample. Tests on the MultiTest 0.5-i are fully automated. The software accepts the test parameters and displays test progress graphically in real-time, revealing exactly how and when the film fails under tensile force. Mecmesin’s Emperor™ test software stores results and the raw data that produces them. It can also display a sample’s performance in simplified form, as a colour-coded “pass” or “fail”.

Eurofilm Mantzaris chose the MultiTest 0.5-i for its combination of affordability, usability, and sophisticated statistical programming capability.

“The MultiTest 0.5-i is a very good and reliable machine and the Emperor Software brings great advantages. It’s a very useful tool for these kinds of tests. It’s fully programmable and offers an in-depth analysis of results. It’s a precious tool for everybody involved, especially those who work with plastics and their mechanical performance.”
Nikos Michopoulus, Quality Control, Eurofilm Mantzaris S.A.