Have I got Newton for you…

I don’t know about you, but when I have been to a school reunion, I have always been a bit defensive. I mean, its not exactly a boost to your ego to find out that the "spotty lad" who was in your class is now an eminent surgeon, or a successful author or has been honoured with an OBE. Consider for a minute what a reunion of the class of 1650 at the King’s School Grantham could have been like if the "lad" turned out to be a boy named Isaac Newton. The list of his accomplishments would make anyone feel a bit of an underachiever. Forget about being head prefect, Newton was:


Oh, and he was the author of an astounding series of manuscripts on subjects ranging from mathematics to optics and gravitation, he probably invented calculus or fluxions as he called it. He developed a theory that white light is composed of many colours, formulated an empirical law of cooling and studied the speed of sound. He invented the reflecting telescope, and wrote the Principia Mathematica - which is regarded as one of the greatest documents in human history.

In his laws of motion, he reasoned that a body remains at rest or changes its speed only if acted on by a force. This was in contravention of what most people believed, that the natural state of everything was to be at rest, and it needed a force to keep things moving. Newton changed the way people thought about the world, and did so with such perception that it was more than 200 years before his theories were amended. He was honoured by the newton becoming the name for the standard unit of force – an accolade that will last for all time.

How then does an understanding of Newton’s work impact on the modern life? Well, it is hard to think of an area where specifying, measuring or controlling a force does not feature. Almost everything we do - from hitting the “snooze” button on the alarm clock, tapping out the numbers on the iPhone, peeling the lid of a yoghurt for lunch, tightening the wheel nuts on your car to locking the front door at night involves applying a force in some way. 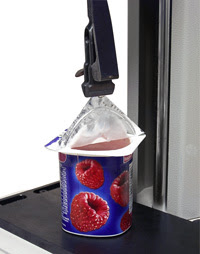 Being able to measure force is the starting point for the designer, but also an essential tool for the manufacturer of the yoghurt pot who wants to make sure the lid always peels off the way it should first time, every time. A Mecmesin force gauge can tell you if the reality matches the design.

We at Mecmesin think a lot about Newton, we named our building after him - Newton House. We also have a picture of him just inside the front door, and there he sits looking down on us as we climb the stairs. Newton’s third law of motion states that for every force there is an equal and opposite reaction. As I mount the stairs I think - “Am I going up, or is the world going down?” That’s a bit too deep for early in the morning, it must be time for coffee. Click the switch on the kettle (6.2 newtons). Open the fridge door (29.7 newtons).

Newton changed the way people thought about the world. Mecmesin gives you the instruments to understand it a little better. Newton’s thinking is just as relevant today as it was when he first scribbled them down in his tiny handwriting. His ideas have led to an understanding that lets us explore just about every aspect of the modern world. Applying his ideas has led Mecmesin to produce products to measure force and torque in just about any situation you can think of, from materials research to routine testing for quality control. So the next time you need to know just how much force is the right amount of force, give a thought for Sir Isaac, and call us at Mecmesin +44 (0) 1403 799979.
Posted by James Hovey at 11:27